Since last week’s blog post spotlighted Lady “Sally” Jersey, I thought it only fitting that this week’s feature Osterley Park, the lovely estate she inherited.

Though just ten miles from central London, Osterley was considered a country estate. Today, visitors can reach the National Trust property by traveling the Piccadilly line toward Heathrow and getting off at the Osterley exit. From the subway station, turn left upon exiting and you’ll quickly come to the brown National Trust signpost pointing the way to Osterley, a short and straight shot.

I selected to highlight Osterley because of its many associations with Georgian/Regency England. The first association, of course, being Lady Jersey.

The most significant association with Regency England is Osterley’s maintenance of spectacular Robert Adam interiors. In fact, Osterley is the only stately home in England which boasts Adam’s interiors exactly as he designed them.

For example, when he designed a room, he did not just concentrate on its architecture. 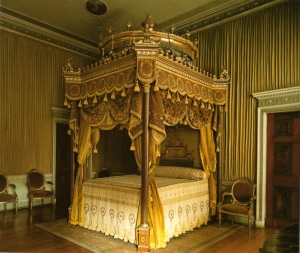 He would design furnishings, mirrors, sconces, wallcoverings, and even furniture.

Adam also left his stamp on Osterley’s exterior and landscape. Adam “adjusted” Osterley’s original Elizabethan exterior by adding a Grecian pediment in the Palladian style, eliminating a number of rooms, and repurposing the former courtyard.

As the landscape architect, Adam added the little temples and summer houses so common to grounds of the great country estates during the Regency.

HISTORY
The wealthy Sir Thomas Gresham (?1519-1579), commercial agent and advisor to the Crown and builder of the Royal Exchange, built his stately country home ten miles from London at Osterley Park around 1565. At least twice Queen Elizabeth visited Osterley and the 750 acres surrounding it.

After Gresham’s death the house passed through a series of owners before it became the property of the wealthy Childs Bank family. Sir Robert Child (1674-1721) was the first member of the family to reside at the house. Sir Robert served as an MP, a Childs Bank director and as director of the East India Company. Each successive member of the family was more eminent than his predecessor, with Sir Francis Child the Younger also serving as Lord Mayor, and each generation brought more improvements to Osterley.

The immensely wealthy Robert Child (1739-1782) employed Robert Adam to transform the Tudor mansion into a neo-classical edifice for which Adam is known. Adam reduced the size of the house from the original 46 rooms, added a classical “transparent” pediment and converted the dormered attic into a third floor.

When Robert Child died, his will bypassed his only child (a daughter who had married the 10th Earl of Westmoreland against his wishes) and settled his entire fortune and all his properties on the second child of his daughter’s marriage. Therefore, the fortune went to Lady Sara Fane (1785-1867), who became the Countess of Jersey a year after marrying George Villiers, the 5th Earl of Jersey in 1804. The Jerseys chose to reside at the London townhouse at Berkeley Square and at the Jersey family seat, Middleton Park in Oxfordshire.

In 1885 the Jersey family was forced to sell Osterley’s famed library to make needed repairs to the house.

Various schemes to either lease or sell the property never materialized, and after the 9th Earl of Jersey inherited in 1923 he made the decision to keep the house and its contents intact for future generations to enjoy. Because there was no endowment, few organizations he approached would take over ownership of the property; so, in 1939 he opened it to the public. A decade later, he presented it to the National Trust.

Osterley Park is used as the background of Henry James’s The Lesson of the Master. 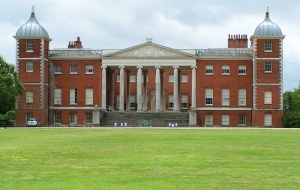 HOUSE
Little of the Elizabethan house remains, save for the plan of constructing a square building around a courtyard and the corner turrets topped by ogee lead caps (which were actually built later).

Robert Adam’s neoclassical stamp pervades the house. Employed at Osterley for 17 years beginning in 1763, Adam designed not only the architecture but also the furnishings, carpets, cornices, mirrors and every facet of architectural embellishment. The State Apartments at Osterley are the only surviving example of Adam’s finest interior decoration complete with the furnishings he designed for them.

The exterior is remarkable for the pedimented ionic portico that bridges the two side wings without enclosing the original courtyard.

Visitors will see the subdued gray Hall with its fine white plasterwork, Mrs. Child’s Dressing Room and Bedroom, the 130 foot long Gallery, Adam’s elegantly restrained Great Stair, and the aforementioned State Apartments that remain as Adam designed them more than two centuries ago. The State Apartments include the rose-colored Tapestry Room, the Drawing Room, the State Bedroom with its unsurpassed domed and gilded bed, and the Etruscan Dressing Room. 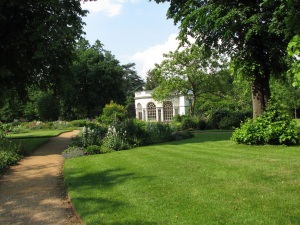 GROUNDS
The park and gardens at Osterley are much diminished from former times, especially since the 1965 construction of the M4, but Osterley still provides a tranquil, country setting a mere 10 miles from London’s Charing Cross. Committed to retaining Osterley’s rural character, the National Trust in 1996 purchased an additional 150 acres adjacent to Osterley’s 150 acres the trust already owned.

Locals in London’s borough of Hounslow flock to this serene setting. The park, which features broad lawns and a lovely lake, can be enjoyed for free.

A fee is charged to see the gardens. These include gardens around Adam’s Garden House, the American Garden planted with North American shrubs and plants in the 18th century, and the lake. A woodland walk (about 45 minutes) takes visitors past the Temple of Pan, which was built around 1740, and around a stream that flows into the lake.