Arthur Wellesley, who became the Duke of Wellington in 1814, shared many things with aristocratic younger sons who chose military careers. Like many young officers separated from suitable prospective spouses for long periods of time during battles and campaigns, he longed for a wife of his own class. And like other young officers, he was a man of honor.

It was these two qualities which encouraged him to contract a disastrous marriage when he was 37 years of age.

He had met Kitty Pakenham when he was 27 and she a lovely, lively young lady of 23. He desperately wanted to marry her and conveyed to her his feelings, which she reciprocated. Because of his lack of financial prospects, her family rejected him. Ten years later, the two still wished to marry, and this time he had returned from India with a great deal of money; so, her family agreed to the marriage.

The disaster was mitigated by the fact they two “lovers” had not seen each other in ten years. When he saw her just after the announced nuptials, he remarked to his brother, “She has grown ugly, by Jove!” But he was honor bound to marry her.

They married immediately in 1806, had their first son (Arthur) the following year and their second and last child (Charles) the next. During the following years, they usually lived apart, and when they were together, they never shared a room.

He found her “intolerable” to be around.

He had many mistresses throughout his marriage and was one of the personages whom the notorious courtesan Harriette Wilson wrote about in her memoirs. Even when he was commanding the British Army in the Peninsula against Napoleon’s armies, the newly enobled (1808) Viscount Wellington wrote to the Secretary of the Army requesting an accoucheur (the equivalent of a present-day obstetrician) to come and attend his Cyprian.

After Napoleon was sent into exile (the first time), the newly created Duke of Wellington was named Ambassador to Paris in 1814. While his duchess was present, he scandalized even the French by parading around with his then-mistress, Giuseppina Grassini.

Upon becoming the hero of Waterloo in 1815, he was besieged by literally every woman who crossed his path. He possessed a George Clooney-like attraction to women. Only more so, because he was also considered one of the most powerful men in Europe.

From 1822 until her sudden death at age 40 twelve years later, the chief woman in his life was Mrs. Arbuthnot, although he certainly had mistresses during that time. Many people thought she was his mistress, but there is no evidence of it. By all accounts, her husband was as close a friend to the duke as was Harriet Arbuthnot.

The three men she was closest to in life (Charles Arbuthnot, the Duke of Wellington, and former Foreign Secretary Lord Castlereagh, who committed suicide in 1822) were well-borne Irish Tories a quarter of a century or older than she.

What is indisputable is that the duke admired the lovely young woman more than any other woman he ever knew, and he shared almost everything he thought, heard of, or knew with her. She served as hostess at political dinners at Apsley House, the Robert Adam-built London abode purchased by Wellington in 1817 (and which is still used as a museum to his many careers, including Prime Minister from 1828 to 1830).

More than any other documents about Wellington, it is her diaries—not published until 1950—which have most elucidated Wellington historians.

In those diaries, she had this to say about the duke’s pitiable wife: “She [the Duchess of Wellington] is the most abominably silly, stupid woman that ever was born; but I told the Duke I thought he was to blame, too, for that all would go much better if he would be civil to her, but he is not. He never speaks to her and carefully avoids ever going near her.”

Society matrons who desired the duke’s attendance at their affairs knew they must also invite Mrs. Arbuthnot to ensure his coming.

Despite the common knowledge of the married duke’s affection for the also-married Mrs. Arbuthnot, her reputation remained respectable. The Duchess of Kent even presented her little daughter, the future Queen Victoria, to Mrs. Arbuthnot.

After Mrs. Arbuthnot’s death, woman once more began to try to force their affections on the duke, but he never married again, even though his detested wife had died in 1831—21 years before his own death. 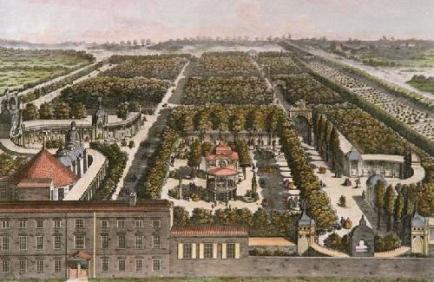 On my recent sojourn in England I came across a small 1909 book titled London’s Lure. Some of that country’s greatest authors are represented in these pages, and I shall be blogging about their observations about their nation’s capital.

The people of London are as fond of walking as our friends at Pekin of riding; one of the principal entertainments of the citizens here in Summer is to repair about nightfall to a garden not far from town, where they walk about, show their best clothes and best faces, and listen to a concert provided for the occasion. . . 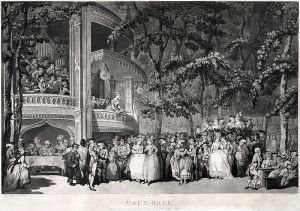 The illuminations began before we arrived, and I must confess, that upon entering the Gardens, I found every sense overpaid with more than expected pleasure; the lights everywhere glimmering through the scarcely moving trees, the full-bodied concert bursting on the stillness of the night, the natural concert of the birds in the more retired part of the grove, vying with that which was formed by art; the company gaily dressed, looking satisfaction, and the tables spread with various delicacies, all conspired to fill my imagination with visionary happiness of the Arabian lawgiver, and lifted me into an ecstasy of admiration.

“Head of Confucious,” cried I to my friend, “this is fine! This unites rural beauty with courtly magnificence! If we except the virgins of immortality that hang on every tree, and may be plucked at every desire, I do not see this falls short of Mahomet’s paradise!” 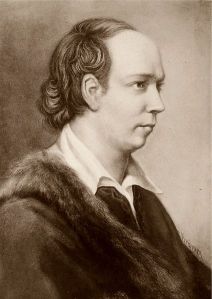 “As for virgins,” cries my friend, “it is true they are a fruit that do not much abound in our Gardens here; but if ladies, as plenty as apples in autumn, and as complying as any houri of them all, can content you, I fancy we have no need to go to heaven for paradise.” (Goldsmith in 1774 at the age of 44.)