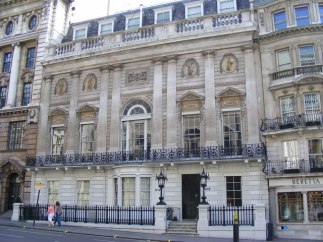 White’s Note the bow window on the ground floor

The following poem takes a tongue-in-cheek peek at the arbitrators of fashion who sat in the infamous bow window of White’s on St. James. The author is Henry Luttrell (1765-1851) who Byron referred to as “the best sayer of good things, and the most epigrammatic conversationalist I ever met.”

Indeed, all the diaries and letters I’ve read from the era refer to Luttrell as the great wit. The most recent edition of the Englilsh Dictionary of National Biography says that, unfortunately, most of Luttrell’s wit does not translate well two centuries later. It’s one of those cases where ya had to be there.

Luttrell was the illegitimate son the 2nd Lord Carhampton.

The Bow Window at White’s

Shot from yon Heavenly Bow, at White’s,
No critic-arrow now alights
On some unconscious passer-by
Whose cape’s an inch too low or high;
Whose doctrines are unsound in hat,
In boots, in trousers, or cravat;
On him who braves the shame and guilt
of gig or Tilbury ill-built;
Sports a barouche with panels darker
Than the last shade turned out by Barker;
Or canters, with an awkward seat
And badly mounted, up the street.
Silenced awhile that dreadful battery
Whence never issued sound of flattery;
That whole artillery of jokes,
Levelled point-blank at hum-drum folks;
Who now, no longer kept in awe
By Fashion’s judges, or her law,
Strut by the window, at their ease,
With just what looks and clothes they please!

Since George “Beau” Brummell was known to occupy a seat in that most well-known of bow windows, I suspect Luttrell is poking fun at him in this poem which first appeared in Luttrell’s Advice to Julia, published in 1820, four years after Brummell fled to France to keep from debtor’s prison. I found it in my little 1909 gem, The Lure of London.—By Cheryl Bolen, who’s delighted to announce the release of a Christmas novella (The Theft Before Christmas) in the Regent Mysteries series is now available in print and eBook.