Those of you who read my blogs know I’m a passionate reader of biographies, especially ones about dead Englishmen and women. Quite by accident a few years ago, I realized many of these biographies I’d read were written by three generations of women in a remarkable British family.

These non-fiction titles from my personal shelves were all penned by members of Lady Elizabeth Longford’s family.

This dynasty began with the intellectual Elizabeth Longford (1906-2002), a mother of eight and wife of Frank Packenham, later 7th Earl of Longford (a descendant of the 1st Duchess of Wellington). Elizabeth’s firstborn is eminent biographer Antonia Fraser (b. 1932), and Antonia’s daughter Flora (b. 1958) is one of the premiere biographers in England today.

I hung on every line of Elizabeth’s 1986 autobiography, The Pebbled Shore. She and her future husband were in the first wave of Oxford intellectuals following the first war and were contemporaries and friends with Evelyn Waugh and Lord David Cecil and later were acquainted with Churchill and T.E. Lawrence. They spent the early years of their marriage working toward the social reforms that would later be put into practice throughout the British Isles.

Lady Longford did not come into her own as a biographer until she was in her sixties, but her works were remarkably well researched, especially for that era. Among these are two volumes on the Duke of Wellington, a biography of Lord Byron, and another on Queen Victoria. 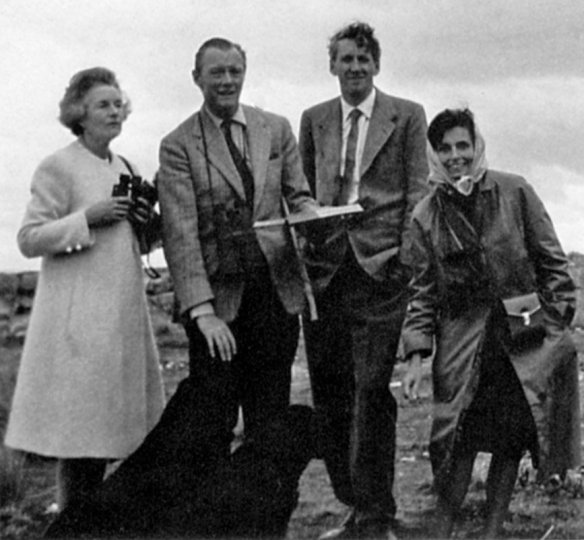 Her always-precocious daughter Antonia has written in several genres, and her body of work is impressive, but she too is a first-class biographer. Among those she has done biographies on are Mary Queen of Scots, King Arthur, Cromwell, Charles II, and most recently, Marie Antoinette.

Perhaps the finest biographer of the three is Flora Fraser, one of Antonia’s six children. No one researches more meticulously. She spends years on her subjects, which have included the six daughters of George III, Queen Caroline, Pauline Bonaparte, and Emma Hamilton. (Note all these lived in the Regency, and of course I’ve read them all!)

The literary Longfords were celebrated at a Foyle’s lunch in 1967. Lord Longford’s wife is on one side, daughter Antonia on the other, and five more of their children also were authors.

There were many other writers in this esteemed family, including the patriarch. In fact, I’ve got Lord Longford’s History of the House of Lords.—Cheryl Bolen, whose novella A Christmas in Bath will continue her Brides of Bath series set in Regency England.

Since I strive for authenticity in my Regency-era historicals, especially in my Regent Mysteries, I try to use many personages who actually existed. English Foreign Secretary Lord Castlereagh makes a few appearances in my A Most Discreet Inquiry (Regent Mysteries, Book 2).

Born Robert Stewart in Ireland in 1769, he was elevated to Viscount Castlereagh at the age of 26 when his father became the Earl of Londonderry. Two years earlier he had entered the English House of Commons, where he would serve until his death in 1822 and which he would lead for the last decade of his life.

The same year he entered the English Parliament, 1794, was also the year in which he married Amelia (Emily) Hobart, daughter of John Hobart, 2nd Earl of Buckinghamshire. Castlereagh’s maternal grandfather (Francis Seymour Conway, 1st Marquess of Hertford) as well as his father-in-law had both served as Lord Lieutenant of Ireland. Lord and Lady Castlereagh were devoted to each other but never had children. Lady Castlereagh became well known in London as one of the patronesses of Almack’s.

As Secretary of War in 1809, he challenged Foreign Secretary George Canning to a duel at Putney Heath. In the duel, he shot Canning in the leg and had to leave government for the next three years.

He returned in 1812, at the age of 43, becoming Secretary of State for Foreign Affairs, a position her held for ten tumultuous years, while also leading the Tories in the House of Commons. Despite that he worked tirelessly for his country to ensure a lasting European peace, he was extremely unpopular not only with the populace he served but also among newspaper editors and political cartoonists.

He succeeded his father as Marquess of Londonderry in 1821, but since it was a non-representative Irish peerage, he could still serve as leader of the House of Commons of Great Britain.

Two weeks before his suicide the next year he began suffering from paranoia, which could be attributed to the years of abuse by an angry citizenry and press, overwork, or even gout. He imagined himself persecuted from every quarter and became irrational and incoherent. His devoted wife continued sleeping with him but removed pistols and razors from his reach and kept in close contact with her husband’s physician, Dr. Bankhead, who had cupped him.

Three days before his death he met with King George IV, who became upset over Castlereagh’s mental state, as did the Duke of Wellington, with whom he was close. Knowing that he was losing his mind, Castlereagh left London for Loring Hall, his country estate in Kent.

The morning of his death he became violent with his wife, accusing her of being in a conspiracy against him. She left their bedroom to call the doctor. That was when her husband went to his dressing room with a small knife which he had managed to hide. He stabbed himself in the carotid artery. Just as Dr. Bankhead entered the room, he said, “Let me fall on your arm, Bankhead. It’s all over!”

The suicide of Lord Castlereagh

The nation was shocked. Even his bitter parliamentary opponent Whig Henry Brougham mourned him. “Put all their other men together in one scale, and poor Castlereagh in the other – single he plainly weighed them down,” Brougham said. “Also he was a gentleman, the only one amongst them.”

Lord Byron did not agree. He wrote over his grave:

Posterity will ne’er survey
A nobler grave than this:
Here lie the bones of Castlereagh:
Stop, traveller, and piss.

Despite the circumstances of his death—attributed to insanity—the longtime Foreign Secretary was buried in Westminster Abbey near his political ally and mentor William Pitt. –Cheryl Bolen, whose novella, A Christmas in Bath, continues her Brides of Bath series set in Regency England.