What were Londoners doing if they were not born into the class that was permitted to sleep late? Just after the break of dawn, shops – and, surprisingly, pubs (public houses) – opened. Here’s an excerpt from Charles Dickens’ Oliver Twist, which was published in installments beginning just after the Regency, in 1837. This short excerpt paints a vivid picture of the various conveyances and workers, including milk women. 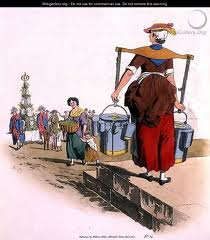 In the Bethnal Green Road the day had fairly begin to break. Many of the lamps were already extinguished; a few country wagons were slowly toiling on toward London; now and then, a stage-coach, covered with mud, rattled by: the driver bestowing, as he passed, an admonitory lash upon the heavy waggoner who, by keeping on the wrong side of the road, had endangered his arriving at the office a quarter of a minute after his time.

The public-houses, with gas-lights burning inside, were already open. By degrees, other shops began to be unclosed, and a few scattered people were met with. Then, came the struggling groups of labourers going to their work; then, men and women with fish-baskets on their heads; donkey carts laden with vegetables; chaise-carts filled with live-stockor whole carcasses of meat; milk-women with pails; an unbroken concourse of people, trudging out with various supplies to the eastern suburbs of the town,

[In] the City the noise and traffic gradually increased; [and in] the streets between Shoreditch and Smithfield it had swelled into a roar of sound and bustle. It was as lilght as it was likely to be, till night came on again, and the busy morning of half the London population had begun.