The memoir of Mary Elizabeth Lucy, the mistress of Charlecote Park, a fine old Elizabethan house now in the care of the National Trust, gives the modern-day reader a glimpse into the education and courting of a Welch heiress during the Regency period.

The daughter of Sir John and Lady Margaret Williams of Biddlewyddan, Mary Elizabeth was born in 1803, and in her eighties set down her remembrances for her grandchildren.

Her childhood centered around piety and strict discipline. When she was very young, her grandmother taught her prayers, and after her grandmamma died, her pious mother undertook her religious instruction.

The children—there were eight in all—were taken care of by a nurse in their early years. “Whenever we were naughty,” Mary Elizabeth writes, “she used to say a witch would come and take us through the window.”

The nurse wasn’t all frights. She slept in the nursery with the children, and it delighted them to climb in her four-post bed once she vacated it in the mornings, and they would draw the curtains and have a game of romps, where they would knock each other down with pillows. Their old nurse was devoted to the children throughout her life.

Throughout her childhood, Mary Elizabeth would read Scripture to the illiterate nurse who doted upon her.

When Mary Elizabeth’s younger brother went off to school, a governess was brought in for the girls. Lessons began at six each morning in summer and seven in winter. If she was late, she had to forfeit a penny. At eight, they broke for breakfast which consisted of a bowl of bread and milk.

Her governess was very strict. If Mary Elizabeth missed even a single word in a page of history memorization or in a poem, she would be locked in the schoolroom closet where the exercise books—and the governess’s loaf of bread—were kept. This terrified Mary Elizabeth because mice, attracted to the bread, made their home within the dark closet.

The children had a half-holiday on Saturday and a whole one on their birthdays. Though children’s birthday parties were unheard of, on their birthday they were allowed to dine with their parents, and their old nurse would be allowed to come and take desert with them—dressed in her silk gown and lace cap.

The birthday of the firstborn son was an occasion to be celebrated with a dance for all the neighbors to attend.

There was a “schoolroom boy,” a servant whose chief duty was to clean the shoes of the children of the house. The lad was eager to learn to read, and Mary Elizabeth would meet him in her play time, armed with her spelling book and a slate. She said it took the patience of Job to teach him because he was “so stupid,” he could not remember the alphabet.

From her governess, Mary Elizabeth learned French and Italian as well as needlework. 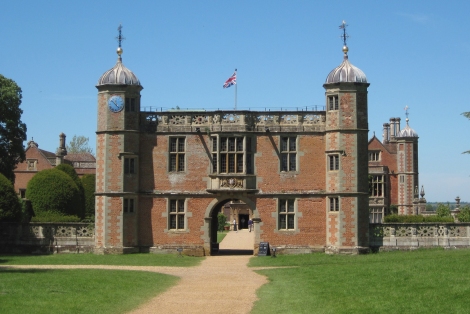 Her grandmother had read the children an old-fashioned book, Cobwebs to Catch Flies, and her brother would tell her tales of the Arabian Nights.

As she grew older, she became passionate about the study of music and drawing. Everyone in the family played musical instruments, and Mary Elizabeth played several, including the organ and the harp.

At the annual ball to celebrate her eldest brother’s birthday when she was sixteen, dancing began at nine o’clock and continued until four in the morning. “The waltz was not yet known outside London Society,” she wrote. “We danced only country dances, quadrilles and reels.” The end of the ball was signaled by the Sir Roger de Coverly.

In her teens she started studying with a new governess who had her read Shakespeare, Sir Walter Scott and the French works by Racine, Corneille, and Moliere, and in Italian, Tasso and Petrach.

Her first introduction to society away from her North Wales neighborhood occurred when she and her three sisters went to Lancashire for the Preston Guild, a fortnight celebration that occurs once every 21 years. Balls were held every night, and there was a Mayor’s Reception where everyone wore court dress.

A year later George Lucy, the 34-yer-old owner of Charlecote Park, which included land that had been in the Lucy family for 600 years, came to Mary Elizabeth’s home in Wales at the invitation of one of her brothers. In London, one of her sisters had greatly admired him, and it was thought he was coming to Wales to see her.

However, once he saw Mary Elizabeth, no other Williams daughter would do. He soon asked her father’s permission to marry Mary Elizabeth.

When her father told her, she fell to her knees and begged him not to have her marry George Lucy. Such a ploy had worked before when another of her sister’s callers had asked Sir John for his Mary Elizabeth’s hand.

The difference this time: the wealthy George Lucy came from one of the oldest families in Britain, and his ancestral home, Charlecote Park, was one of the finest old homes in the kingdom. Sir John wasn’t about to let his daughter forgo an opportunity like that.

No amount of tears could dissuade him.

Many years later she wrote: “I had been brought up to obey my parents in everything and, though I dearly loved Papa, I had always rather feared him. I felt I dared not disobey him.”

After her quick meeting with “Mr. Lucy” who officially proposed to her, Mary Elizabeth flew upstairs to her mother and wept.

“My sweet Mary,” he mother said, “love will come when you know all of Mr. Lucy’s good qualities.” 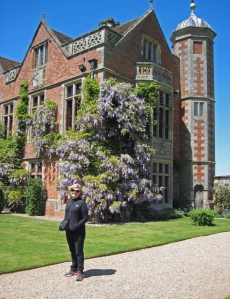 Cheryl Bolen with lovely Charlecote Park in the background

Being so pious, Mary Elizabeth prayed that she would become of good wife.

Several weeks later they wed at the cathedral near her home, and when she rose from her knees after the ceremony, she fainted away.

Despite the rocky beginning, the marriage was a happy one that produced eight children. In a very short time her mother’s prophecy had come true. Mary Elilzabeth fell deeply in love with her husband. — Cheryl Bolen (pictured right at Charlecote Park, summer 2013)

England’s lovely Charlecote Park estate, along the banks of the River Avon, has much to entice a visitor, not the least of which is a nice collection of ten carriages used over its history. Carlecotte has been in the Lucy family for 800 years but was handed over to the National Trust in 1946.

I was fortunate enough to tour it during my current tour of England. It was so nice to view these conveyances in which my fictional characters ride.

Vehicles which required a coachman, or driver, were the brougham, the barouche, and the coach (also used as a traveling carriage).

The barouche required two horses and was almost exclusively used in London for daytime social activities, particularly for drives through Hyde Park. Its folding top was usually put down, rather like the convertible of today.

The Rolls Royce of conveyances was the coach, like the crested one I am standing beside here. Notice there is no seat for the driver. That is because these were driven by postillions, either two or four. Understandably, these were owned by the very rich.

Phaetons were driven by the owners, with a perch on the back for their groom.  Either one or two horses could be used. Sportsmen were particularly attracted to phaetons.

I highly recommend a visit to Charlecote Park, where demonstrations on Tudor dress and fabrics, one of the country’s only extant private brew houses, and a massive Victorian kitchen with demonstrations all are available for the visitors’ pleasure.

Buy at Amazon.com Buy at BarnesAndNoble