The ruins of Corfe Castle, selected by British Heritage as Britain’s top castle.

Can you guess which castle British Heritage selected as the number one castle in the country? Sadly for me, it’s not one I’ve been to. It’s Corfe in Dorset. The “ruin” dates to the 11th century.

I can’t imagine it besting Tintagle, a magnificent Arthurian ruin on Cornwall’s rocky north coast. The Ten Best Castles in Britain were selected by the editors of British Heritage.

Tintagle (My favorite ruin) did not make the Atop 10 list.

Three of the Top 10 I’ve toured – and loved: Arundel in West Sussex, coming in third; Dover Castle, at fifth; and Kent’s Hever Castle, called the childhood home of Anne Boleyn, at tenth. 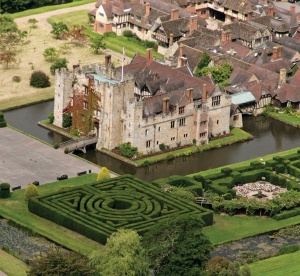 I’ve done a drive-by of two others: Stirling in Scotland, fourth; and Warwick Castle, which was selected eighth.

Rounding out the list were Conwy Castle in North Wales, second; Caerphilly Castle, also in Wales, at sixth; Alnwick in Northumberland, which celebrated 700 years as home of the Percy family, seventh; and Scotland’s Blair Castle at ninth.

Chiswick House (the Brits pronounce as Chiz-ick) is today located in suburban London, but when it was built in the Georgian era, it was a palatial estate alongside the River Thames in Richmond and was accessible from London by boat. It was one of many Thames-side villas that had begun to be constructed from the early seventeenth century onward. 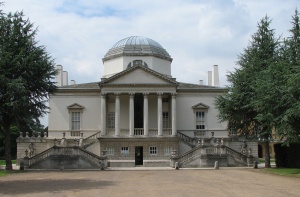 For me, Chiswick is perhaps the most quintessentially Georgian of all the fabulous homes built in the era–even though it is neither of grand proportions nor was it intended as a family home.

The immensely wealthy Third Earl of Burlington (1694-1853) was an arbitrator of taste and style. He had traveled extensively on the Continent and was one of the earliest disciples of Italian architect Andrea Palladio, who was the primary influence of the clean classic lines that characterize Georgian/Palladian architecture.

So fascinated was Burlington with Palladian architecture, he designed Chiswick himself—something the idle aristocrats simply did not do. Construction occurred from 1726-1729.

Another of the significant Georgian associations with the house is that Chiswick passed to Burlington’s grandson, the Fifth Duke of Devonshire, whose wife Georgiana was an arbitrator of fashion and leader of English society the last quarter of the eighteenth century. 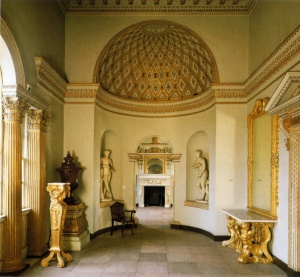 And the last significant Georgian association, at least for me, is that charismatic Whig leader Charles James Fox died at Chiswick in 1806, the same year Georgiana died.

Lord Burlington intended Chiswick House to serve as a temple of the arts to display his most significant works of art.

The perfectly symmetrical, perfectly classical structure’s most memorable feature is the octagonal saloon at the center, which soars up to a domed roof that is lighted by dome-shaped windows. Huge canvases have hung in this chamber for almost three centuries.

One reason Chiswick was not designed as a family home was because Burlington had inherited his grandfather’s Jacobean house on the property, which he continued to use. His grandson had that demolished and added wings onto Chiswick. The wings were demolished in the 1950s to restore Chiswick to Burlington’s original vision.

Today, the house is in the care of English Heritage and can be toured for a fee. The surrounding grounds—significantly reduced from what they were in Georgian times—are free to the public and cared for by the Borough of Hounslow.

Buy at Amazon.com Buy at BarnesAndNoble