One of the most well-known men in Georgian England was Horace Walpole (1717-1797), a younger son of the first British Prime Minister, Robert Walpole. Horace would have been assured a certain notoriety because of his family connections, but he also blazed his own trail as a man of letters, a Whig politician, art connoisseur, and builder of Strawberry Hill House.

Horace Walpole’s greatest source of fame came from his immensely bestselling novel, The Castle of Otranto, which was first published in 1764. At first released under a pseudonym and purported to be a translation from old Italian documents, Walpole soon took credit for the unique work, which established the genre of the gothic novel.

The rich details of Georgian life in his erudite letters are a valuable resource to historians.

Walpole started building his “gothic castle” in Twickenham in 1749 and continued on it for nearly 30 years, expanding from the original five acres to 46 acres while designing gardens befitting his showplace house. During his lifetime, Strawberry Hill House drew throngs of visitors.

Strawberry Hill in the 18th century

Though Strawberry Hill was considered in the country during Georgian times, it is located in the present London borough of Richmond-upon-Thames and was one of a proliferation of Thames-side villas erected by aristocrats and other wealthy men during the eighteenth century.

The Lewis Walpole Library at Yale University has a database of all Horace Walpole’s art treasures, their current location, and descriptions of those whose ownership has not been traced. 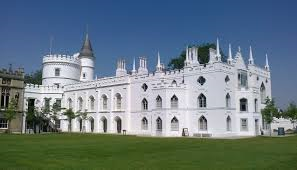 After two centuries, the house re-opened to the public in 2010 and is administered by the trust. It can be reached by a variety of London transit options. Since it is currently just a three-minute walk from the Thames River Walk around Richmond, it is suggested that visitors walk along the river path from Richmond in order to tour Strawberry Hill House.—Cheryl Bolen’s newest release is A Christmas in Bath (Brides of Bath series)