Our whole family has a love affair with London, and since our sons have grown we’ve spent a lot of our time in its pubs.

In London, you can find a pub (this name a shortening of public house) on every block, but it’s much harder to find a historic pub in the world’s most urbane, international city. Nowadays, many pubs have morphed into wine bars. Others have eschewed traditional “pub grub” like shepherd’s pie for appetizers like . . . can you believe nachos? And many have gone Zen with their decor. We prefer dark with rich old wood bars. We love to get fish and chips and kidney and shepherd’s pies. If there’s a fireplace, so much the better. My last consideration is “associations.” What historical figures are associated with the pub?

The oldest pubs typically are in the oldest parts of London, around The City and the boroughs immediately surrounding it. (There are 32 boroughs in this vast city.) Most of the really old pubs will have low ceilings and often are housed in several smaller rooms.

Here’s a list of historical pubs we have sampled. It is not complete because we will continue adding to it with each new trip.

One of the first historical pubs we ever checked out was Ye Olde Cheshire Cheese (rebuilt in 1667) in The City. Though there’s a sign for it on Fleet Street, customers enter through a “close,” which is a narrow pedestrian street, off of Fleet.

Many decades ago my high school English teacher showed us slides from her 1950s trip to London. I remembered two things about those slides more than 20 years later when I took my first trip to England. I recalled all the post-war rubble of bombed buildings—and the name of an old pub where Samuel Johnson and many other literati had imbibed, Ye Olde Cheshire Cheese.

Now, no trip to London is complete for us without a swing by the quaint, dark warren of rooms. We prefer the tiny front one with its own fireplace. We loved being there on weekdays and seeing all the bankers and journalists coming off Fleet Street in their suits for an after-work pint. Sadly, in recent years, it’s been discovered by tourists, and those British accents are becoming rare. 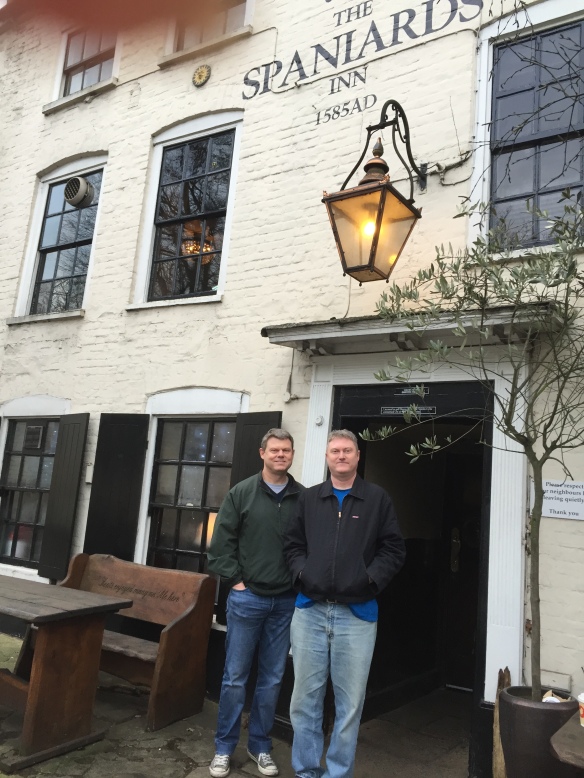 My sons at the Spaniards Inn.

The second must-visit pub for us each trip is the Spaniards Inn, which we first discovered on a 1996 trip, though it’s been in picturesque Hampstead alongside the Hampstead Heath since 1585. Hampstead is about four miles north of Charring Cross. The pub/inn is located by a tiny 400-year old toll house that’s no longer in use. A lot of history is associated with this inn. Famed highwayman Dick Turpin (1707-1739) was said to have been a regular, and poets John Keats and Lord Byron were frequent guests. It’s said Keats, who lived nearby, wrote Ode to a Nightingale in the inn’s gardens.

I prefer the interior’s low-ceilinged nest of rooms, some with cozy high-back benches of old oak. If there’s no rain and even a hint of sunshine, Londoners, on the other hand, will opt to eat and drink in the large garden, part of which is arbored.

Unlike Ye Olde Cheshire Cheese, this has not been overrun by tourists. It is very popular with locals from the posh surrounding neighborhoods of Hampstead and Highgate, and its parking lot (a rarity for a London pub) is filled with Range Rovers and BMWs.

The George is entered in the same way it was when it was a coaching inn.

Just as atmospheric as the first two, The George is London’s last remaining galleried inn. It is the only one on our current list located south of the River Thames, in Southwark. Just steps from the Tower Bridge tube stop and a minute’s walk from the river, The George is still entered the same way as coaches and horses entered when the inn was rebuilt in 1676. The former inn yard now offers ample outdoor seating.

The former inn yard now offers outdoor seating — not a preference at chilly Christmas time when we were there!

Though the National Trust bought the inn to preserve it, it’s no museum. It’s a popular hangout for food and drink, and the interiors are authentic English pub. Like Ye Olde Cheshire Cheese, The George is composed of many small rooms that offer that unique coziness that promotes good conversation and good times. It was visited by Charles Dickens and mentioned in his Little Dorrit. 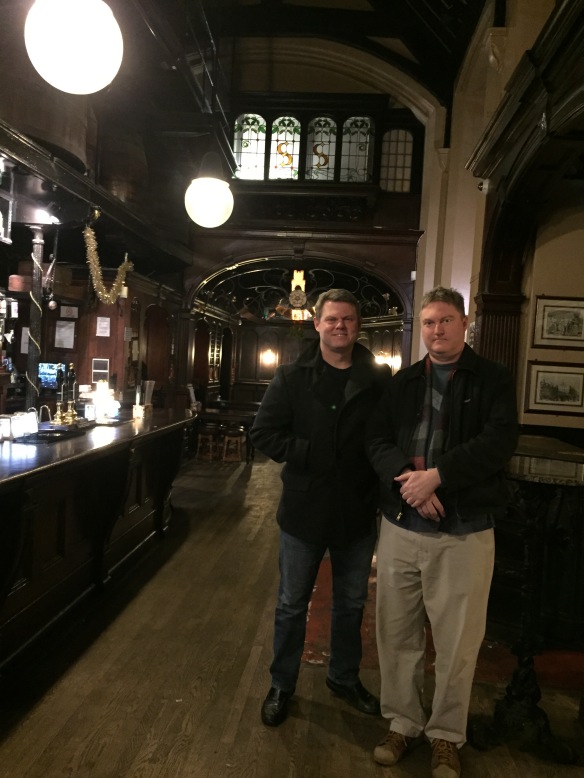 The Bolen Boys at the Cittie of Yorke.

Though there’s been a pub on this site since 1430, the current one is decidedly Victorian though it only dates to the 1920s. It’s located in High Holborn not far from the Chancery Lane tube stop. It was formerly known as Henneky’s Long Bar and was the subject of a Dylan Thomas ode.

Though it’s a vast departure from the low-ceilinged labyrinths of some of our favorite old pubs, this is a must-see. There’s a cozy front room, but the heart and soul of this wonderful pub is its high-ceilinged main room with the famed long bar. Something about it—perhaps its high clerestory windows—reminded me of the big hall in the Augustinian Brewery in Salzburg. There is plenty of dark wood here to add the patina of age. 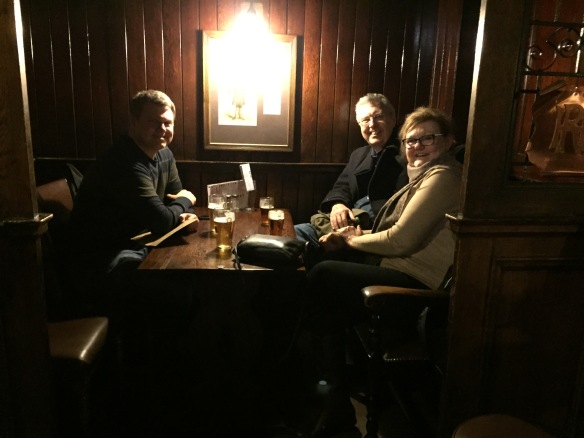 Enjoying a pint (or half pint, in my case) in one of the Cittie of Yorke’s cozy cubicles.

The pride of place at the Cittie of Yorke are the Victorian-style oak cubicles that line either side of this large, wood-floored chamber. We had to wait to claim one, but it was well worth it. An added plus is the pub’s endorsement by the Campaign for Real Ale.

The Cross Keys in Covent Garden

The Lamb and Flag in Covent Garden

The Old Bell Tavern in the City