Bess of Hardwick (1527-1608) built the original home on the site in 1552. The house passed to her son William Cavendish, who became the first Earl of Devonshire in 1618. The 4th Earl of Devonshire, William Cavendish (1640-1707), became the 1st Duke of Devonshire for his part in bringing William of Orange to the English throne. The first duke is responsible for the house visitors see today. He pulled down Bess’s house in 1686, and with architect William Talman, started construction on the palatial house that stands today. It took more than 20 years to build and was completed the year of his death.

The 4th Duke, by marrying the heiress daughter of Lord Burlington (Palladian prophet, builder of Chiswick), brought even greater wealth and properties into the family.

Among the most famous occupants of the house were the 5th duke and his glamorous duchess, Georgiana, daughter of the 1st Earl Spencer. (A biography of Georgiana was the number one best selling book of 1999. It chronicled her husband’s affair with her best friend and the two illegitimate children born of that affair, making for one of the most interesting menage a trois in history. The 2005 Keira Knightley movie Duchess is based on the book.)

Since the time of its completion, Chatsworth has had “open days” for public viewing. It is said to be the inspiration for Mr. Darcy’s estate in Jane Austen’s Pride and Prejudice and actually serves as Darcy’s Pemberley in the 2005 movie.

The home’s five original state apartments were never visited by William and Mary, for whom they were intended, but Queen Victoria visited Chatsworth during the reign of the 6th, or Bachelor Duke (1790-1858), who was the first to make substantial changes to Chatsworth. In addition to adding a new wing, his most substantial changes were brought about by landscape designer Joseph Paxton, who also built the Crystal Palace in Hyde Park. Like the Crystal Palace, his Great Conservatory at Chatsworth is now gone, but his rockeries and fountains remain.

During World War II Chatsworth was occupied by a girls’ school. The rooms and corridors were dormitories, and the drawing rooms and larger bedrooms were classrooms.

The 11th Duke inherited Chatsworth in 1950 following the sudden death of his father. (His elder brother, who had married President Kennedy’s sister Kathleen, had been killed in the war.) It would take him 17 years to pay off the 80 percent death duties and would require selling off some of the estate’s art collection and deeding the Devonshire’s Hardwick Hall to the National Trust. Chatsworth, too, needed substantial repairs and modernization. By opening Chatsworth to the public and establishing the Chatsworth House Trust, the 11th Duke was able to preserve Chatsworth for future generations. When he died in 2004, the Guardian said the 11th Duke was able to turn his magnificent stately home in Derbyshire “into a public resource without compromising its dignity or losing it as a family home.” His son, the 12th Duke, continues living at Chatsworth.

The baroque palace of Chatworth with its surrounding 12,000-acre estate in the Derbyshire hills has repeatedly been selected as England’s favorite country house. Despite its fairly remote location, it draws 300,000 visitors a year. The collonaded, pedimented view of the house that is most photographed is not the entrance through which visitors enter.

The portion of the house built before the addition of the 1820s wing is constructed around a central courtyard. Only a portion of the home’s 297 rooms are open to the public. Perhaps the most recognizable of these is the Painted Hall, so named for the 17th century paintings of Julius Caesar that adorn the ceiling and walls. Floors here are of black and white checkered marble, and the hall’s focal point is a broad central staircase balustered in gilt iron and carpeted in red.

After climbing stairs in the Painted Hall and the Great Stairs, visitors come to the five original state apartments: the Great Chamber, the State Drawing Room, the State Music Room, the Bedchamber and the State Closet. Each features ceilings painted in the 17th century, as well as fine woodworking craftsmanship on the walls. It is thought the state bed which retains its 1700 coverings belonged to George II. 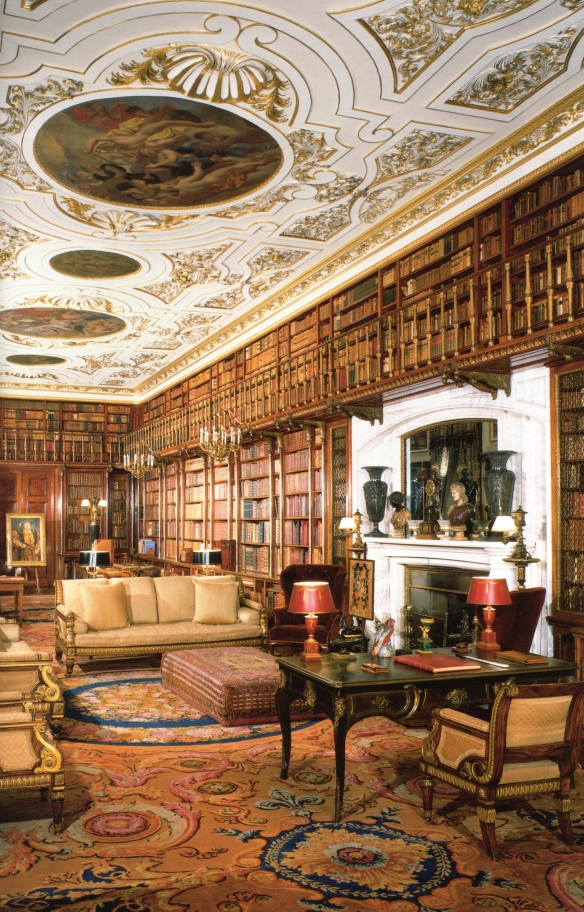 The library is roped off but can be viewed by visitors before they stroll into the Ante Library and its adjacent Dome Room, which features a windowed alcove flanked by polished marble columns.

The 1820s wing houses the Crimson Dining Room where Queen Victoria was feted while she was still a princess. Other rooms on the public tour include the 6th Duke’s Oak Room, a Grotto, Sculpture Gallery, and the Chapel.

Treasures (paintings, sculpture, and furnishings) from London’s Devonshire House, sold in the 1920s, and from Lord Burlington’s Chiswick House melded with those already at Chatsworth to give  Chatsworth what is said to be the finest art collection of any English country home.

Chatsworth has been selected as one of England’s nine Treasure Houses.

It is difficult to separate the palatial house of Chatsworth from the stunning grounds in which it is set. The 35,000-acre agriculture estate offers a 1,000-acre park that is open free to the public. Wooded hills with footpaths rise above the house, and the River Derwent rushes alongside the property’s pastoral sheep pasture. One day is really not long enough to explore all this property has to offer.

In earliest times, the house, which sets at the foot of the Derbyshire hills of the Peak District, was surrounded by formal gardens. The 4th Duke, however, demolished the 1st Duke’s formal gardens when he chose Capability Brown to landscape the parkland around the house in 1756. Fortunately, the 1st Duke’s cascade and the temple above it, voted Best Water Feature in England, has survived, along with his Willow Fountain, Canal Pond, and Flora’s Temple.

Capability Brown’s scheme to make the grounds around Chatsworth look natural included the planting of broad lawns and a variety of American trees.

Landscape architect Joseph Paxton’s (1803-1865) mark on Chatsworth is the most distinct today. Trained at Kew Gardens, Paxton is responsible for the huge rockeries, the pond their water flows into, the Azalea Dale and ravine, and the Bamboo Walk.

In modern times a maze constructed of 1,209 yew trees, flower gardens, and a Serpentine Hedge have been added. The original stable block, constructed to house 80 horses, is now used for the Farmyard demonstrations, and the 6th duke’s carriage house now serves as a restaurant. For children, there is an Adventure Playground.

Cheryl by Georgiana’s portrait at Chatsworth