I thought this day would never come. Book 2 in my lighthearted Regent Mystery series, A MOST DISCREET INQUIRY, has finally been released. Book 1, WITH HIS LADY’S ASSISTANCE, was a finalist for Best Historical in the International Digital Awards for ebooks released in 2011. It was also was named to the 5 Star Hall of Fame at the Historical Romance Critic site. Learn more about the new release at http://www.cherylbolen.com/discreet.htm

To celebrate the October release of MARRIAGE OF INCONVENIENCE, I am offering an autographed copy of my out-of-print ONE GOLDEN RING which won the 2006 Holt Medallion for Best Historical but is no longer being published. In that Brazen Brides book and its prequel, COUNTERFEIT COUNTESS, the bookish Rebecca Peabody was introduced to readers who have since been clamoring for her to have her own book. Thanks to Love Inspired Historical, that story, MARRIAGE OF INCONVENIENCE, will be published in October, and preorders are now being taken for it at all online retail sites.

The Christmas story ONE GOLDEN RING is another Brazen Brides marriage-of-convenience romance. Here’s what the critics had to say about it:

Cover Quote: “Who can resist a marriage of convenience between a couple who have nothing in common–but passion! ONE GOLDEN RING is an irresistible pleasure.” Eloisa James, NY Times Best-selling author

“This has got to be the most PERFECT RegencyRomance that I have read this year.” 5 STARS Huntress Reviews

ONE GOLDEN RING is a rare treat: a highly sensual novel with a solid emotional foundation. In Print

The Wit in the Dungeon: The Remarkable Life of Leigh Hunt, Poet, Revolutionary, and the Last of the Romantics

Before reading Anthony Holden’s excellent biography of Leigh Hunt (1784-1859), I knew but a handful of things about this prolific author whose career spanned from the pre-Regency to well into the Victorian era, where he was a much-older contemporary of Dickens. 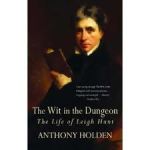 Most famously, he is known as the journalist who was convicted of libeling the Prince Regent and spent two years in prison. Remember the “Fat Adonis” reference?

Here’s that story in a nutshell: In March of 1812, on the occasion of the regent’s fiftieth birthday and in defense of the exceedingly unpopular prince, the Morning Post ran a tribute to the prince, which, in part, said, “You are an Adonis in Loveliness!”

Ever truthful, even when the truth was painful, Hunt countered in the Examiner (published by his elder brother):

Far from being an “Adonis in Loveliness,” this princely betrayer of Catholic emancipation was a corpulent gentleman of fifty. . .a violator of his word, a libertine over head and ears in debt and disgrace, a despiser of domestic ties, the companion of gamblers and demireps, a man who has just closed half a century without one single claim on the gratitude of his country or the respect of posterity.

The Hunt brothers were slapped with a costly libel suit. Even when the simple printing of a retraction could have prevented the trial and ensuing imprisonment, Leigh Hunt refused. It is likely a more honorable journalist never existed.

During his two years of imprisonment, Leigh Hunt was toasted as a celebrity, a defender of truth, a man of courage. Great men from far and wide came to visit him in his home-like furnished prison rooms.

The very name of this book, Wit in the Dungeon, was Lord Byron’s title for Leigh Hunt, whom he’d never previously met but carelessly tossed out the term when announcing his plan to go visit “The Wit in the Dungeon.”

Hunt’s career writing for his brother had begun several years earlier when he was scarcely more than a boy. He became a theatre critic for his brother’s brand-new weekly newspaper, The News, in 1805. Here, too, he broke with the establishment and refused to print flattering remarks that were not true. He is credited with pioneering theatre criticism as we know it today.

In a day in which theatre criticism was little more than paid advertising, Hunt eschewed the practice of accepting free admission in exchange for kindly praise. He said he’d “as lief take poison as take a free ticket.”

His cleverly scathing reviews – a sheer novelty – of plays and actors soon became the talk of London, and they contributed to the success of his printer brother’s newspaper.

The time the brothers spent in prison during the next decade, though, may have shoveled them into a financial hole from which they never recovered.  Hunt was embarrassingly poor for the duration of his life, but would never yield on his principles.

In addition to his tenure in prison for attacking the regent in print, the only other thing I knew about Hunt before reading Holden’s work was that he was the first to recognize and shine a light upon the poetry of Keats and Shelley in the newspapers he edited, and I’d read about him (with his ever-expanding brood of children) visiting Shelley in Italy. He was there when Shelley died, and he never got over his feeling of deep loss for his idolized friend.

In Italy, he also worked with Byron, but theirs became a bit of a strained relationship.

Since my first introduction to Hunt was to Hunt the journalist/critic, I did not realize he spent much of his life on what he considered greater literary pursuits, particularly on his passion for poetry.

Although he continued to write for the rest of his life and was known far and wide for his wit, Hunt never achieved lasting fame as a writer.

His footnote in history will always go back to his “Fat Adonis” imprisonment or to his discovery of Keats’ and Shelley’s genius.